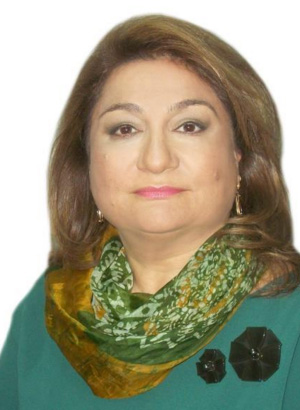 Chairwoman of the State Committee for Family, Women and Children Affairs of Azerbaijan Republic

Mrs. Hijran Huseynova was born in August 13, 1955. In 1985 she finalized her researches and received a PhD degree in History. In 2001 she became the first women –Doctor of political science. Since 2001 she has become an expert in gender programs of OSCE and Council of Europe. Since 2007 she has been Professor and Head of the department of Diplomacy and Modern Integration at Baku State University .On February 6, 2006 Ms. Hijran Huseynova was appointed as a Chairperson of the State Committee for Family, Women and Children Affairs of the Republic of Azerbaijan.She has several public and state awards. In 2011 she was awarded The National Order of the Legion of Honour by the President of France.In 2015 she was awarded Glory Medal for active participation in political and public life of the country by the President of Azerbaijan Republic. Mrs. Huseynova has authored 52 scientific articles, 4 monographs and three books