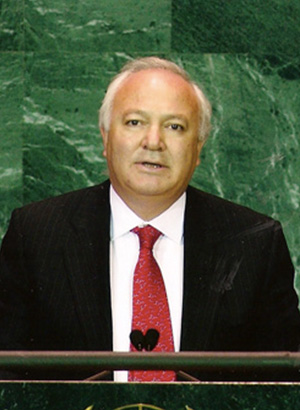 Former Minister of Foreign Affairs and Cooperation of Spain

Miguel Ángel Moratinos is a Spanish diplomat and politician. He has committed his professional activity to international relationships and development cooperation. In 2004, he was appointed Minister of Foreign Affairs and Cooperation. In his term at the head of the department, he held the presidency of the UN Security Council and the chairmanships-in-office of the Organisation for Security and Cooperation in Europe (OSCE), the Council of Europe and the Council of the European Union. From 2012 to 2013, he was a member of the High-level advisory panel of the President of the 67th UN General Assembly. During his career, he has been awarded numerous distinctions and decorations acknowledging his political and diplomatic career.